In this film we outline the theme of violence against elderly people. There appears to be an even bigger taboo attached to this subject than to violence against adults or children. In an interview with Victim Support Centre it becomes clear that this form of violence does occasionally also occur on Bonaire. These are distressing cases. The vulnerability of the elderly person is painful to watch.

The registered cases were practically all brought to the attention of aid agencies thanks to observant neighbours. In the corridors Victim Support Centre does hear of situations that may be related to violence more often but it is very difficult, especially for a victim, to file a report. People are afraid to do so. The reaction is then: “I cannot do it because it is my child!”​

For the affected elderly person it is very difficult to acknowledge that there is question of neglect or abuse. The shame dominates. “It is my child! How can I file a report?”

A specialist explains this case

We asked the expert Inge Berben (trained in psychosocial assistance and trainer of the pilot group domestic violence) to address the matter a bit more thoroughly. How does it get this far and how do we feel about this as society? We take a fictitious look into the life of the father and son from the film.

The father feels his body and mind getting weaker. It makes him feel vulnerable. The world around him is changing. To make sure that everything goes well he placed his pension with his son. His son is addicted and uses the pension benefit for other purposes. The man is stuck and therefore often feels very alone.

“What happened to him that he slipped down so much? What did I do wrong? Is it because his mother left when he was still so young? We were still so young… But he was always taken care of by grandma or a neighbour when he was small. It then still felt as if I was not facing it on my own. Now, alone, I do not know anymore. Everybody is busy. Busy with work; busy with their own lives”.

The degree that people feel united in a certain neighbourhood, place, country or island determines the feeling of wellbeing of the individual. Do you share this opinion?
Bonaire is also growing rapidly. The developments on the island and in the world are subject to individualisation. Where everyone knew each other 20 years ago, stayed in the neighbourhood where they had grown up and family ties came first, you now notice more distribution of families over the island and throughout the world. There is an increase in the population growth and an increase in different cultures. This means that the relationships may change. 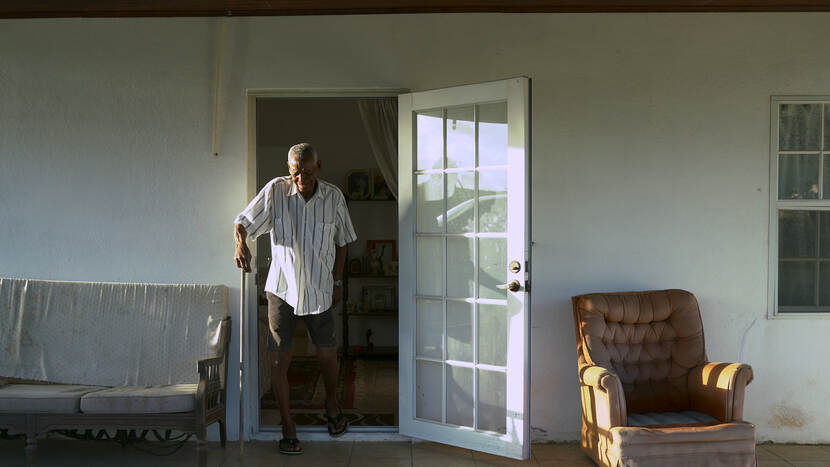 Although individualisation certainly also has a number of advantages, the distressing dark side is also visible in the loneliness, the isolation, the shame and an increase in cross-border conduct.

“If his son had not been such a ‘chòller’ then I would help out. It is just that this guy scares me, his look“.

“I notice that domestic care just went into the house. Thank heavens! I was very concerned about my neighbour. If his son had not been such a ‘chòller’ then I would help out. It is just that this guy scares me, his look. Those addicts can do strange things. I do not want problems in the neighbourhood or in my home. I also have children”.

It is time. Time to enter into discussions with each other about what healthy involvement is. When are you a good neighbour and when are you a meddler? Reaching out a hand as a citizen to someone else or asking a professional for a helping hand is a sign of courage and not so much of meddlesomeness.

“It is time to enter into discussions with each other about what healthy involvement is. When are you a good neighbour and when are you a meddler?”

The very first step when breaking the vicious circle is to make contact. Contact with all those involved – whether they are referred to as perpetrators or victims – in case of violence everyone suffers. They are people in need. You do not need to have the solution. You need courage to make contact from your heart, to show your compassion and to offer a sympathetic ear. We can all take this important first step.

What professionals offer you the helping hand?

The pilot group domestic violence with, inter alia, delegates from the organisations Youth Care, Centre for Youth and Families, Integral District Approach and Victim Support Centre has the vision that the involvement of the network or the creation of a network can offer such support that the violence decreases. Eventually it has the objective of the violence to stop.

Before a network can be relied on, it is important that the assistance builds a relationship with the elderly man and his son. Together it is examined what problems are going on and what the desired situation is. Who is already part of the network and who could be involved. This can be neighbours, a pastor, acquaintances but also professional care providers. All these people are approached by the care provider or the elderly man and his son themselves. Once this has been analysed action points are examined in association with the network. Who accepts what responsibility and who offers what support. A person, usually the care provider who counsels the family, takes control and regularly contacts all those involved in order to monitor that arrangements are met.

The biggest poverty is a lack of actual contact

The way it is described, it appears to be a simple process. In practice it appears to be more complicated. The isolation that people are in is usually the result of shame. When somebody feels ashamed it is often also easier for us to look the other way. Pretend you are not noticing a thing, out of fear that the son gets angry or that the old man denies that there is a problem.

“I cannot remember when someone last held me. I am so tired”.