In 2017, the trade deficits of Bonaire, St Eustatius and Saba were higher than in the previous year. In relative terms, St Eustatius saw the sharpest increase in annual deficit. Statistics Netherlands (CBS) reports this on the basis of new figures.

The Caribbean Netherlands has a structural trade deficit, with imports exceeding exports. Production is relatively low on the islands in comparison with the European part of the Netherlands.

Trade deficit one and a half times higher on St Eustatius

Saba: imports up, exports down

On Saba, imports were up and exports were down in value on 2016. The island’s annual trade deficit in 2017 stood at 17 million US dollars, an increase of 7 percent. The highest import value on Saba was recorded in Q2.

Bonaire’s trade deficit amounted to 202 million US dollars in 2017, 5 percent up on the previous year. Both imports and exports increased. In Q4, Bonaire imported 60 million US dollars worth of goods, representing the highest quarterly value of 2017 and the highest import value since measurements started in 2011. 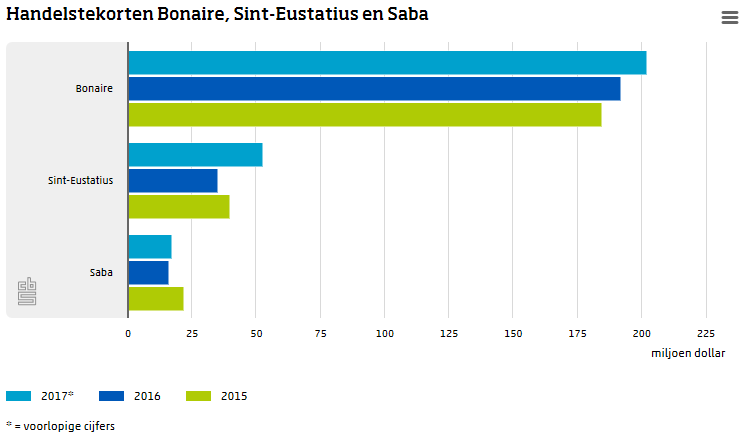 Bonaire imported 213 million US dollars worth of goods in 2017, 6 percent more than in 2016. Import values were higher in virtually all product sections. The sharpest increase was seen in machinery and transport equipment and in mineral fuels. Only the import value of manufactured goods and chemical products was lower. 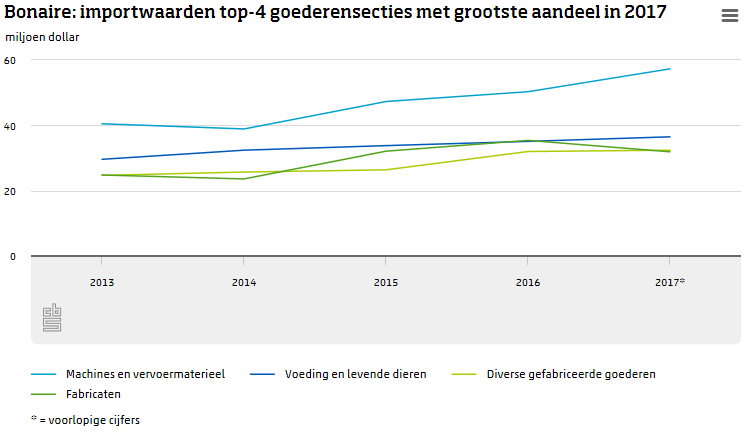